This concert was officially recorded, and sold on CDr after the show.


This captation edited by Ehud Lazin isn't the full show. Some songs are missing,

Setlist of the vidéo : 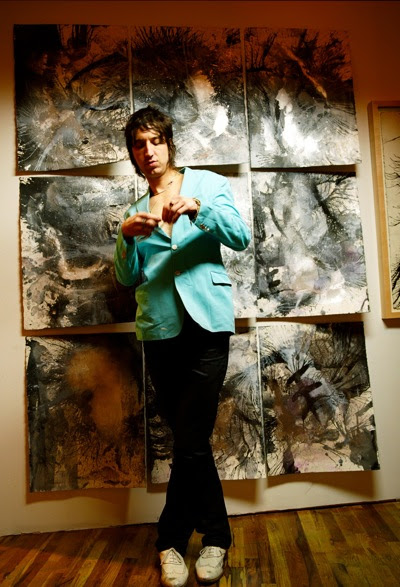 Joseph Arthur is on the road. Again. The prolific singer/songwriter is once more touring the country with his one-man band, looping guitars and live-painting on stages across the U.S., including upcoming residences in both New York City and Philadelphia. In February, Paste met up with Arthur the day after his first of two nights at the infamous Cactus Café in Austin, Tex., and talked poetry, painting and top-secret side projects while perusing the fine country footwear at Allens Boots.

Joseph Arthur: This is a weird place to do an interview, but weird is good. I’m almost too tall for boots. Like, circus tall. I’m like 6’6’’ with boots.

Paste: Is that, like, ostrich? Those are pretty cool. Will your pants fit over those?
Arthur: I’ll wear ‘em inside. I think that’s the theme of this interview: I like to wear my pants inside my boots. Boots out! Boots out!

Paste: Think what you could buy in a music store.
Arthur: Ah, man. But I don’t need anything.

Paste: But you didn’t really start getting recognized until 10 years ago, right?
Arthur: [Laughs] I think I still haven’t got recognized.

Paste: Live at the Gypsy Tea Room?
Arthur: That was 2000. Yeah, that’s when I started coming out a little bit more. Another thing is, when I wear these, what happens when I spill some acrylic paint on ‘em? That’s like, “Damn, $400!”

Paste: For readers, what does acrylic paint have to do with a Joseph Arthur show?
Arthur: Because I paint live. Abstract expressionism, that kind of thing. Sort of Art Brut stuff—live, as I sing. I work pretty hard at it.

Paste: Do you still have the Museum of Modern Arthur
Arthur: No, it closed, thankfully. Way too much overhead and not enough underhead. I don’t know what underhead is, but it sounds good. I was living illegally in the back of it and then I got found out. But we stayed open for two years, longer than we had any right to. It was a really nice place, 5000 square feet. A real gallery. We had some great events and great shows. It ran its course. I found out I like painting a lot. I like writing poems. I like writing music. I don’t really like keeping a shop. I didn’t account for that. I’m glad that closed.

Paste: What I noticed when you began the painting at the start of the show, it seems like you look at it for inspiration during the show.
Arthur: Yeah, the process of a live, solo show is a lot like inviting the external world into your internal space. It’s like, this is my process when I’m at home making music and making art. This is letting people in on that. Because the live looping is a lot like four tracking, but you’re doing it live. Painting is like that, too, where you start something and then you go read a book or something but you keep glancing at it across the room, and so to let your unconscious mind work on it, let ideas come. So that’s all that is—that process. “Oh, yeah, I can do that when I go back over there to paint.”

Paste: When you see a band or a performer play, the only time you see something original is maybe when they riff or do a solo or something like that. Watching you last night it seems we got to see you create more than just doing arrangements of your songs. It seems it was a constant creation. We got to see the whole process.
Arthur: Yeah. It’s kind of about inspiration, the whole thing. I think music and art, at their best, are forms of healing to the person making them and to the audience. That, to me, is really a giant motivation. And that’s what I try to bring in to it.

Paste: When you get up on stage everyone is watching you, you got guitars and you got all these machines, all these pedals. And the audience is wondering, “What he’s going to do with all these toys?” And then you slowly start creating something until it becomes one thing. And by the end of it, there’s a sigh of, I don’t know—not relief, but maybe conclusion?
Arthur: It is kind of a relief, though. Because it’s also like somebody who’s setting themselves up in that way, there’s such a potential for humiliation and embarrassment. And I understand that. To me, that’s the edge of what is interesting about art and music. It’s like, if you’re not up against that line, I feel like I’m bored. Especially now. How many years has this stuff been going on? So to find those places where that line exists, and to live on that razor’s edge or whatever, to me, is what’s compelling about being an artist. If I’m not doing that, I don’t know how interested I’d be.

Paste: So many artists today are so calculating about everything they do—when they do it, how they do it.
Arthur: Yeah, it’s a fear-based society.

Paste: You seem like you’ve always been the opposite of that. Like, “Hey, I feel it. I want to do it.”
Arthur: I have a disposition toward that. And as I’m doing it, it’s, “Why are you doing that, again?” But I can’t help it. It’s too fun. It’s not fun to do it the other way.

Paste: I’ve always loved your voice. But listening to you last night, I felt that your voice is in the most top form that I’ve ever heard it. Do you feel that way?
Arthur: Absolutely! When I first got my record deal I had only been singing for like three years. I started singing when I was 21. I started late. So I think my voice is definitely evolving in a great way. Not to be self bragging. But yeah, I’m happy with how it’s developing and it is coming across. It’s weird because it’s your voice. It’s a personal thing. Some people can like it and some people can’t. There’s no right or wrong. I love singing. I think everybody should sing.

Paste: Are you writing a lot on this tour?
Arthur: Um, I got into a musical project in Los Angeles that I—we—made a record, and it is amazing.

Paste: What musical project?
Arthur: I can’t really talk about it. It’s not released yet. It’s top secret. I can’t help it. I would get killed if I mentioned it. How’s Paste doing?

Paste: [Laughing] Just like the music business—in this digital age it’s, how do you make a living at it? Artists are trying to make money with their music. Journalists are trying to make money with their writing. Both are affected in a big way.
Arthur: It’s interesting. It’s funny that we’re buying cowboy boots, ‘cause it is like the wild, wild west now. I kind of like it. I like where everything is. It doesn’t bother me. I think that it’s going to open up a lot, too. I’m excited about the next few years. I think it’s in the irksome stage of development, still. And it’s a little frustrating and annoying because no one can figure out what’s what. But I think it’s going to open up into something very cool. It is cool. But I think it will be very cool.

Paste: I noticed that you sell recorded copies of each show.
Arthur: I’ve been doing that for years. It’s almost like the 50s, selling stuff out of my trunk. Which I don’t mind. It’s kind of cool to meet your fans or your friends afterward. The barriers between an artist or performer and the people that appreciate the artist or the performer are broken down. And everybody’s on the same human level. I think that’s what’s cool. The mythologies have all eroded and corroded and fallen away. But they’re still there, too. Like, in enough of a way to keep it interesting and fun. The jig is up. People know artists are…whatever, everybody’s the same.

Paste: You market on your website. You make sure people can get your product.
Arthur: Yeah, we talk about it. That’s the new music business. I don’t spend a lot of time going on there because I work best when I’m less aware of what people think and say and do. So I stay away from my own web world. But every now and again you look and go, “Hey why don’t we have this?” It’s hard to keep up with it. ... I want to make music and paint and write poems. I was doing a lot of online poetry and I got into Facebook a little bit. It’s all commentary about people’s commentary. That kind of stifled me for a while. I stopped reading all that and then I got inspired again. You’ve got to be careful with how much you take in.

Paste: Does that mean I can’t ask to be your Facebook friend, now?
Arthur: No, we can be friends. [Laughing] But I just won’t read what you say. Think about it—artists back in the day, they never heard anything from anybody. It was them and their unconscious voice that they were following, or the voice of God or whatever you want to say it is. And that’s it. And maybe their brother said “nice job” or “you suck” and that’s all they had to deal with. Like one or two voices like that. Now, it’s such an instantaneous thing and there’s so much discussion back and forth that I think it can have a negative effect. Like what you said, people can be more calculating. For instance, God forbid that I go on my own YouTube stuff and read the comments. I would never do that, ‘cause if I started reading that… I’m sensitive. It would get in. Whether people say nice stuff or not, it’s the wrong focus. But I think it’s healthy to be free and liberal about what you put out there. I think it’s good to play a song and put it out on YouTube. Bold action is good. But if you instantly read what the feedback is, you can be paralyzed very quickly. There’s no way to police it and I don’t care. But I do care, so I don’t care. [Laughing]

Paste: So if you wrote a song today and loved it, you would play it tonight?
Arthur: Oh, yeah. Definitely.

Paste: Who are you listening to these days?
Arthur: Listening to now? I can’t…

Paste: We’re going to find out now. You know that.
Arthur: Yeah, yeah. When you do, you’re going to flip out. It’s awesome. I’m super excited about it.

Paste: So, what are you going to do with your boots?
Arthur: I don’t know. What do you think?

Paste: They look good.
Arthur: Sweet. Can I, like…

Solo radio session for "Studio A" show with Darren DeVivo