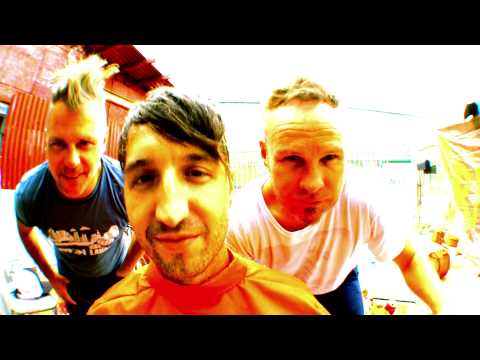 A great radio session on the Pearl Jam channel. 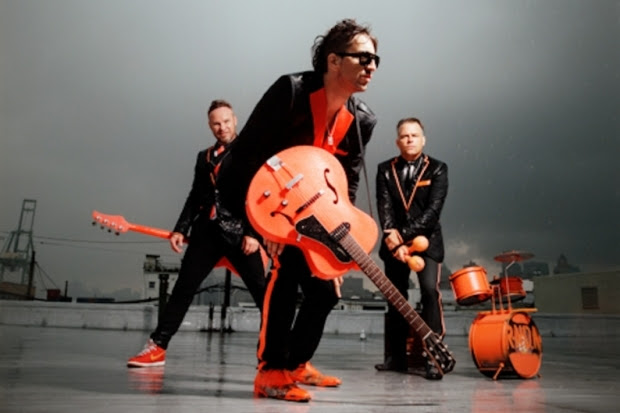 It’s been more than three years since Pearl Jam has released a studio record and bassist Jeff Ament has found plenty of ways to bide his time until the alt-rock icons jump back into the studio. Tomorrow will see the release of the third record Ament has been a part of in the past 36 months when RNDM, his latest side project, releases its debut record Acts. The band is a power trio which features Joseph Arthur (Fistful of Mercy) and Richard Stuverud (Fastbacks, Tres Mtns) and the album is a potpourri of rock filled with uptempo, grooving numbers (“Look Out!”), quieter cuts (“Walk Through New York”) and straightforward power-rock songs (“Modern Times”).

If you’re a regular Guerrilla Candy reader you know I am a big Pearl Jam fan so I was thrilled when the RNDM camp got in touch and offered up a chance for me to chat with Ament. Below is the first part of our conversation where Ament talks about his new band, its origins, color scheme and his experience behind a barber stool. The second half of the interview will be posted tomorrow when RNDM’s Acts is released into the world.

Is the band’s name any indication of how the three of you got together? Is there any meaning behind RNDM?

For me, I’m really visual, so if somebody says something I sort of visualize the word, and Joe was telling us this crazy story. Some artist friend of his was telling him that he had to go to his neighbor’s house because there was something he had to see. So he went over to the house and he had this whole room full of gongs. And he goes, ‘Yeah, there were random gongs everywhere.’ And I was like ‘Man, that’s a band name, Random Gongs.’ So that was kind of the working title for the project for three or four days. We actually even wrote an instrumental track called “Theme from Random Gong.”

That’s kind of the way the whole project went. We were constantly spewing stuff back and forth between one another. But then as time went on I was like, ‘the gong is kind of wearing off on me, but I like random.’ And then to kind of contemporize it we pulled vowels out of it and that’s the name. 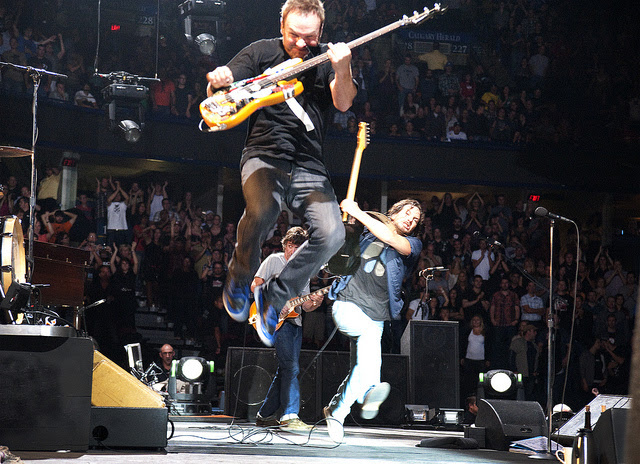 The three of us had still only been in the same room together for seven days during the whole course of this, so it’s still a pretty honeymoon feeling. Most of it has been Joe and I sending texts back and forth. That’s how the video thing came up. He sent this creative treatment and we started throwing ideas back and forth and in a couple of weeks I was going to New York and shooting a video.

I read that you guys had a four-day recording process. That sounds pretty intense.

You know, there really wasn’t any plan for there to be a record or for this to be a band. If I had anything in the back of my head, I was thinking maybe we’d release a seven-inch, or a four-song EP, and it would be this weird little thing we threw out there. But after the first day we had six or seven things down already and then we started talking as if we were a band. We were like, ‘well when we are on tour and we’re in Australia we’re going to do this …’ It was just a big joke, the entire thing. I think even at the end of the four days we still didn’t even think it was going to be a band. We all thought we probably had a record, but we weren’t thinking about being a band. But then after sitting with the record for a couple of weeks it was like, these songs would be fun to play live. They’re all pretty straightforward and most of it kind of rocks, so after a few dozen texts back and forth we kind of turned it into a real thing.

That sort of sounds like how Tres Mtns started. From what I’ve read that started out with the thought of the songs being fun to play live and then the band sort of came together.

Yeah, the difference there is with that thing is that it took us almost ten years to finish that record. The Tres Mtnsthing was two, maybe week-to-ten-day sessions, of which we got ten things out, of which is still a pretty good clip compared to other bands I’ve been a part of. This thing was totally different. Joe chose a song or maybe I would have an idea and show them what I had going with it and then we’d go through it three or four times and if it wasn’t happening we would move on to the next thing. We didn’t really waste a lot of time producing the tracks or getting too precious with them so it was very much a pro atmosphere. We were super-focused. … In the beginning we were super-stoked and knocking ideas back and forth and it just got to the point where we were staying up until two or three in the morning and by nine or ten in the morning people started waking up and were excited to start working on more stuff. So by the end of the four days we were pretty wrecked. I’m almost 50 years old so if I only get four or five hours of sleep a night for four or five nights in a row it’s not enough.


Was it difficult to get Joseph to turn things up a bit? He’s more of a quiet singer-songwriter on his solo material and RNDM is a rocking power trio. 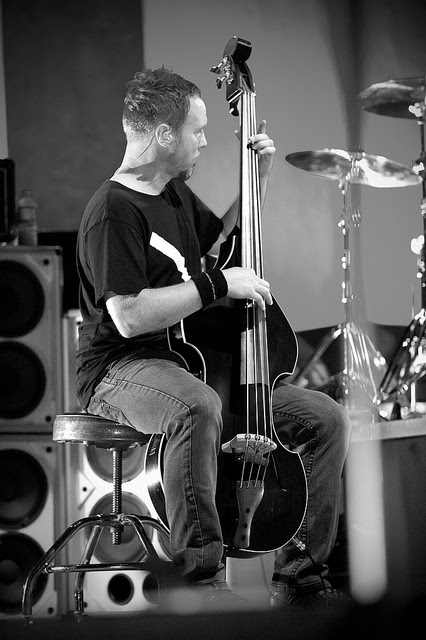 The song that he put vocals on for my last solo record, “When the Fire Comes,” sort of started this whole thing. The conversation we had at PJ 20, when we played the song, he said it was really fun to work on that song because it is a little more uptempo than what he is used to doing. He said ‘I have a really hard time writing more uptempo stuff’ and I said ‘Man, I have tons of uptempo stuff that’s already on tape so if you want to come out and throw vocals on stuff …’

That ended up becoming “Throw You to the Pack,” “Look Out!” and those kind of songs. That was probably the one premeditated idea we had about the band; that we wanted it to rock a little more than some of the stuff that he would normally do. The other thing was to strip it back. I think his nature and my nature when we work by ourselves is to just layer things and multitrack with tons of vocals and tons of keyboards and stuff. With this it was kind of like, I think the one guitar sounds good; we don’t need to put another guitar under it. Or, I don’t think you need to double your vocal on every single song. It was kind of trying to limit ourselves into keeping within the space that was there. It always sounds so great whenever you have three instruments – drums, bass and guitar – it always sounds so cool. You can always hear the textures of the instruments and we were trying to keep it like that as much as possible.

With RNDM there was no history with the band. In fact, it wasn’t a band. It was just three guys getting together to do some recording. I think sometimes when you take that little bit of pressure away from a situation it really frees you up because there isn’t really anything there. There are no expectations. There’s nobody at the other end saying ‘Hey, when’s the record going to be done? Is it good enough to stand up to the rest of your catalog?’ I think sometimes that freedom can make it better because there’s no fear involved with any of it.

With Pearl Jam we have certain expectations with ourselves. We don’t want to do anything half-assed. You kind of want to your best foot forward. I have to say the last few times Pearl Jam has gone in the studio it’s been in a similar way. We knock out seven or eight ideas and everyone gets super-excited. Maybe we’re starting to get back to that way of making music. For a few records it was people bringing in complete demos and the band playing the demos.


You mentioned that you’re a very visual person. Tell me about the orange color scheme with RNDM? 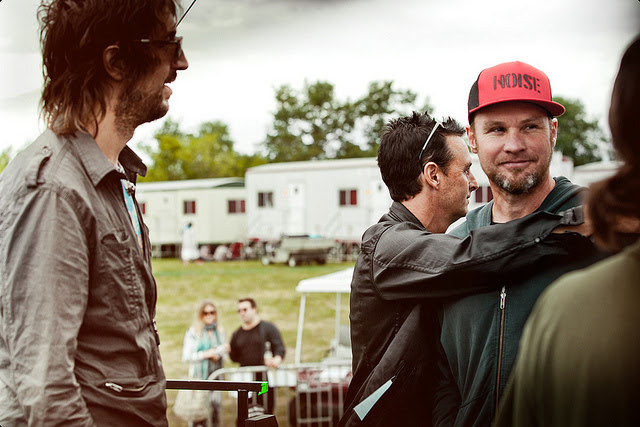 The orange thing initiated from my drum kit in Montana. It’s a fluorescent orange and one of the tracks was called “Orange Drum in the Forest” or something like that, I can’t remember what it was called right now. And so over the course of these texts Joe and I would send back and forth it got to the point where it was like, ‘Okay, having been in the music industry for thirty years you see bands where everybody has an opinion on different things. You always witness somebody in the band doing something where you’re like, you should never do that. What that guy is doing right now should be against whatever is in this book of unwritten rock rules.’ So we started talking about all of this stuff and we thought that this band should be all about breaking all the rock rules we’ve created over our crusty thirty years of being in bands. Let’s do things we never would do in our respective bands and careers.

Then we just started pushing ourselves to do these things. Let’s shave our heads. Let’s dress up in orange jumpsuits. Let’s wear suits. I’ve always been an anti-suit guy. So it sort of became this thing where we were daring each other to do things that we never would do. That just ended up making the whole process super-fun and edgy. Those guys letting me shave the sides of their heads … They had to trust I wasn’t going to butcher their hair too badly. Those guys have good haircuts. Richard and Joe have real stylish, proper, English, rock-style haircuts.

You had to sport the shaved head too, right?

Maybe if RNDM sticks around there can be free buzz cuts at Safeco Field. Instead of Buhner buzz cut it’d be RNDM buzz cut night. Anyone who wears orange gets a free shave from Jeff.

There ya go. Well, my dad was a barber so I was around that culture.

Check back tomorrow for the second half of the interview where Ament talks about his home state of Montana, staying away from being a nostalgia act and the key to Pearl Jam’s longevity. 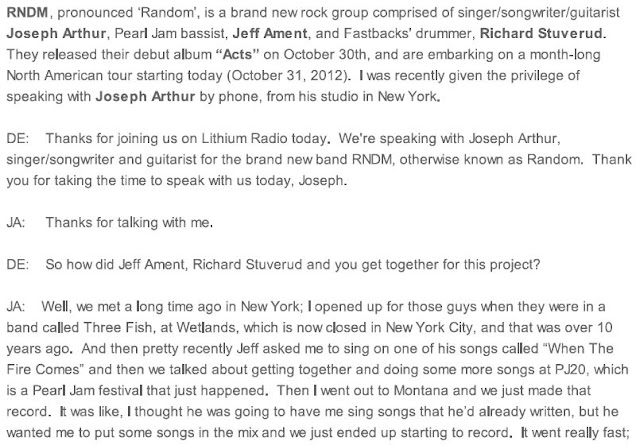 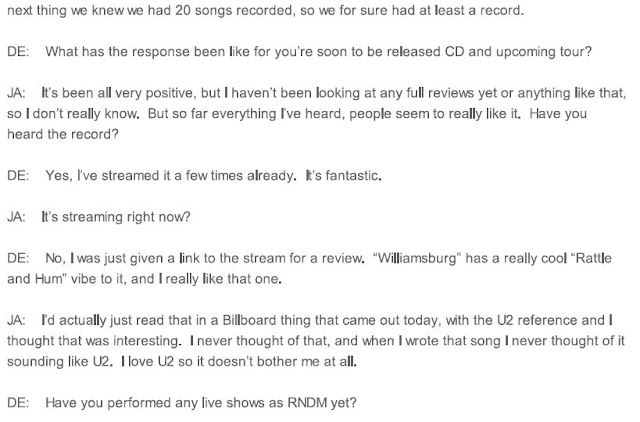 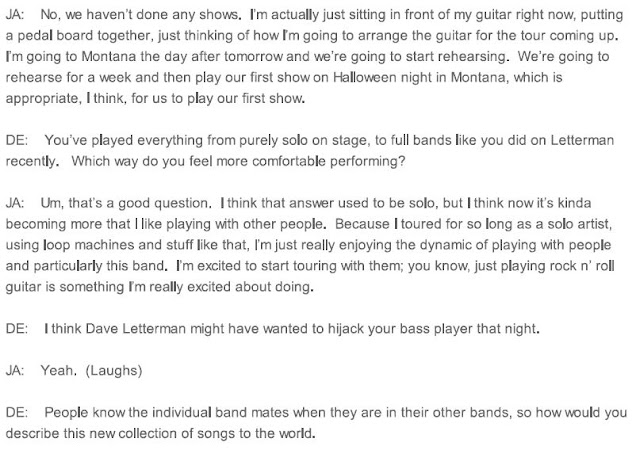 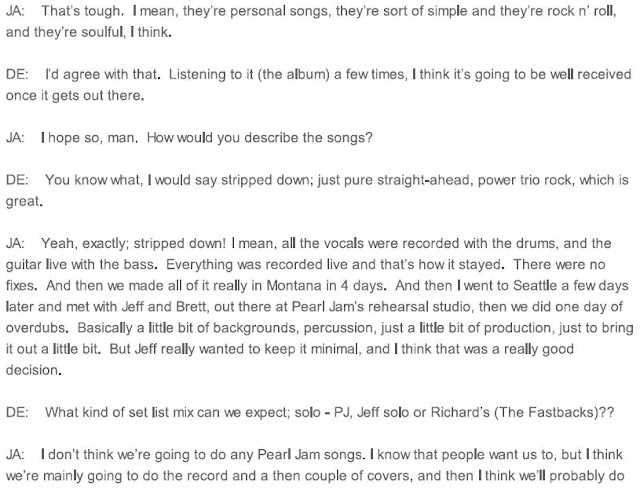 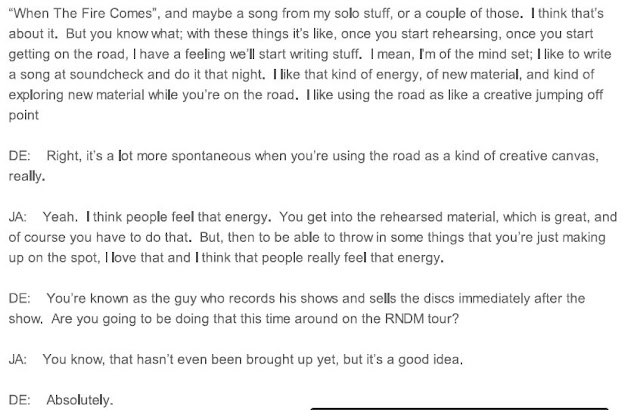 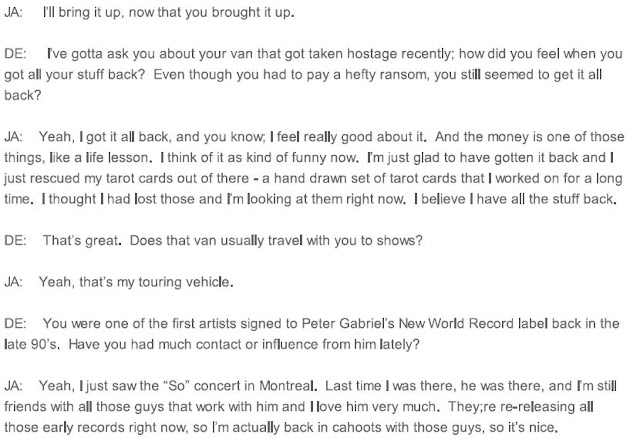 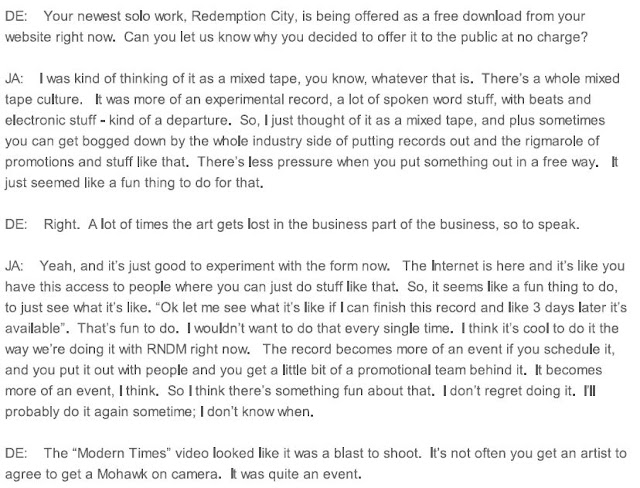 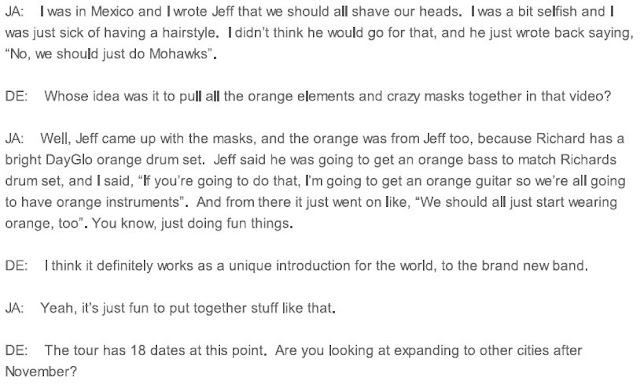 can't exist
slide away
over the sun
devil's broom
too much to hide
daddy's on prozac
a smile that explodes
famous friends along the coast
cocaine feet
black lexus
electrical storm
i miss the zoo
mercedes
where is my van?(with peter buck)
travel as equals(with peter buck)