An audience recording of this event exist. 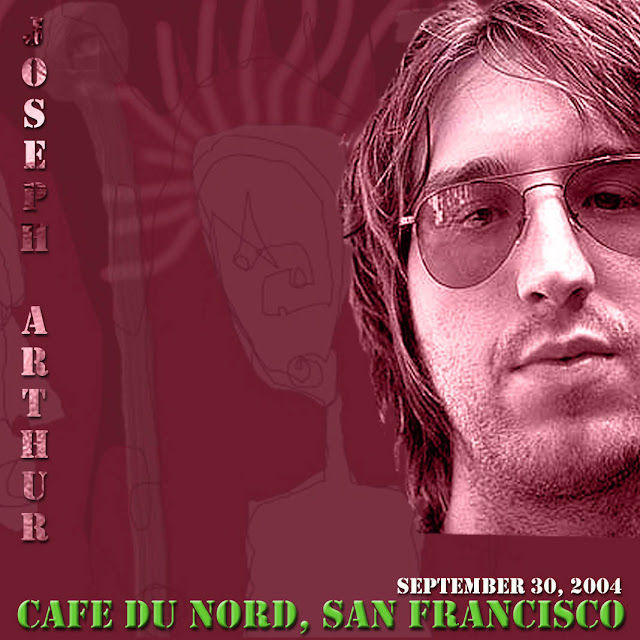 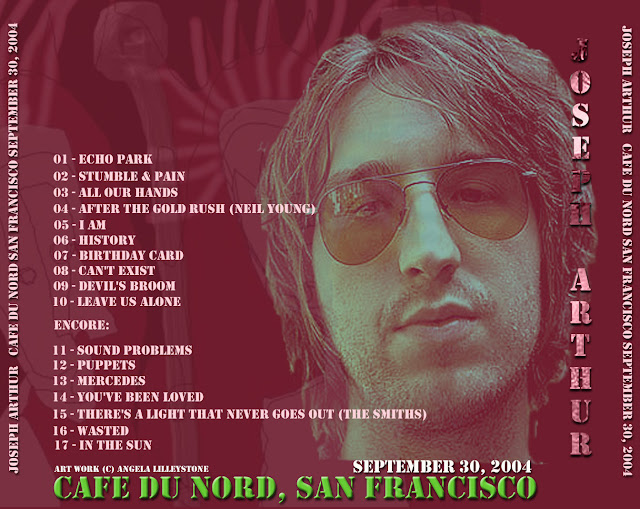 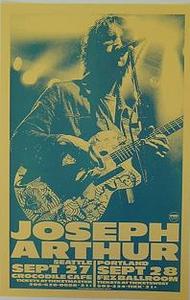 leave us alone
echo park
can't exist
all of our hands

with Joan Wasser on violin and vocals

Even in a culture where unusual and odd things are now deemed routine, the songs, lyrics and performance style of Joseph Arthur can still immediately attract attention.

Getting there
Joseph Arthur will play tonight at the Uptown Mix, at the corner of 20th Avenue South and Division Street. Gates open at 6 p.m. Tickets are $7 in advance or $10 at the door. 321-3043

Arthur is an exciting performer and extremely versatile and unpredictable stylist, something that has been evident since his 1997 debut Big City Streets appeared on Peter Gabriel's Real World label. Interestingly, though he's mostly operated under the radar, there's considerable anticipation for his Oct. 12 release Our Shadows Will Remain, which marks his debut release for Vector Recordings and follows Redemption's Sun, a critically praised 2002 date. Arthur will be appearing today as part of the Uptown Mix along with Wilco.

"I usually have a lot of material on hand and don't have any problems finding songs to record," Arthur said. "But I think this new release will be very different from anything I've done before, which is really the point. I don't want to be stagnant or do the same thing every time, that's extremely boring."

That's a considerable statement because Arthur is also regarded as among the most literate and witty lyricists in the rock arena. Such past numbers as "Mercedes," which featured Brian Eno and Peter Gabriel backing his raspy lead and slashing guitar, or the quite offbeat "Daddy's On Prozac" that packaged a very serious topic in the framework of a comedic lament, as well as the lighter "In The Sun" from his release Come To Where I'm From are all outstanding and memorable numbers.

Gabriel made Arthur the first artist signed to his Real World label that wasn't an international or world performer. Arthur also traveled and played with Gabriel for a time during the late '90s. Gabriel also covered Arthur's tune "In The Sun" for a tribute album to Princess Diana. His 1999 limited edition release Vacancy received a Grammy nomination for packaging and included guest vocals from Joan Osborne as well as production assistance from T-Bone Burnett and Rick Will. Burnett and Will later teamed with Arthur on Come To Where I'm From. In addition, his compositions have been included in such films as The Bone Collector and Hell's Kitchen, for which he wrote the soundtrack.

A poet and artist in addition to being a singer and songwriter, Arthur's wide range of interests fuels his desire to make engaging yet distinctive and individualistic music.

"There's nothing more stimulating or interesting to me than the process of composition," Arthur said. "My goal with every record is to keep progressing and growing and never get to the point where I'm just grinding out predictable music or doing the same record over and over."

Solo concert, with Joan Wasser on violin and vocals.

wasted
devil's broom
can't exist
echo park
leave us alone
wait your turn (?)
need to know me (?)
puppets
i am
there is a light that never goes out (the smiths cover)
mercedes
all of our hands
in the sun
had to go
after the gold rush (neil young cover)


On first listen, Joseph Arthur's songs are dark and mysterious. On second listen, they're magical and masterful. "Our Shadows Will Remain" is Arthur's latest masterpiece, and the singer/songwriter took some time out before his tour to talk to RedEye about recording the disc and its slightly more menacing tone.

You're a New Yorker--why did you record much of this album in New Orleans?

Well, it just seems to me a real interesting city in America. It has this strange vibe, more like Europe or something. It's 24-7, and you're still allowed to smoke in bars, so it seemed like an interesting place to check out. There's the music, the history, and I know people there, so I have places to stay.

The new record sounds like something might have produced. It's pop, but it has a real dark edge to it.

Wow. That's an amazing compliment. I love Brian Eno. He sang on my first record. He's definitely an inspiration, or an influence. He doesn't have an identity that's restricted to one aesthetic. He's sort of fully punk rock, but he can produce a really big pop song too.

What accounts for the disc's darker tone?

I think it was more of a result of how life is, where I've been at. I didn't restrain myself, really, and that can be a good thing.

Is it frustrating that critical success hasn't translated to radio play?

. . . I'm not frustrated, but I went through a period where everything was in flux, in transition. I wasn't living anywhere, specifically; I didn't have a record deal or manager while I was making the record. So I think that sort of energy is in it. There's a feeling of survival and necessity to it.

You're versatile enough to play solo and with a band.

I've been playing with Joan Wasser lately. She used to be in the Dambuilders. She plays violin and sings. It's been a cool accompaniment.

Solo concert, with Joan Wasser on violin and vocals.

This concert was officially recorded, and sold on CDr after the show.

with Joan Wasser on violin and vocals

Solo concert, with Joan Wasser on violin and vocals

The concert was recorded, but this audience recording of poor quality is incomplete.

with Joan Wasser on violin and vocals.