Thank you Denise for the setlist. 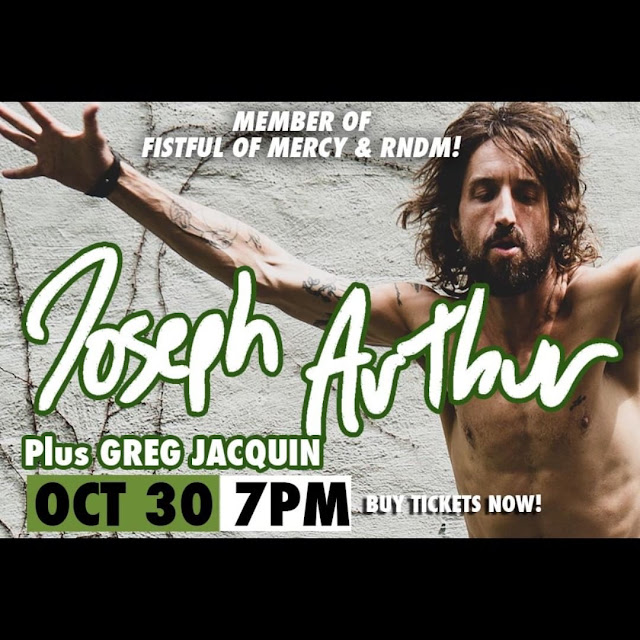 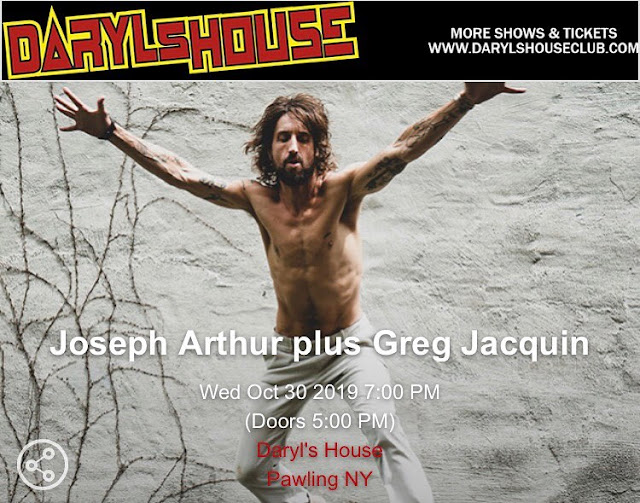 This great audience recording is the first available for the "Come Back World"
Thank you so much Bill to take time to make this. 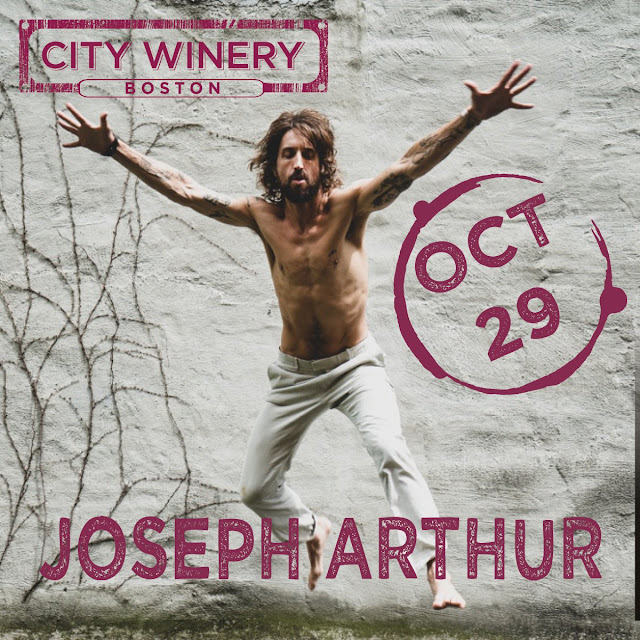 
So happy to see Joseph Arthur performing at Boston City Winery tonight. He performed songs from his new album "Come Back World" and he also amazed us all including himself by remembering all the words to "Birthday Card" which he played by request at the end. Epic. Many well deserved standing ovations tonight too. Great seeing J.B. and Amy and her friend whose name escapes me and finally meeting Lin @quodilin who painstaking spent many hours embroidering a t-shirt with Joseph's favorite prayer/mantra the Ho'oponopono which consists of the words "I love you, I'm sorry, please forgive me, thank you" and presented it to him. (see photo)My limited edition blue vinyl arrived yesterday and I was honored to have it signed tonight. #josepharthur #ComeBackWorld
Une publication partagée par Denise P (@denise_p4) le 29 Oct. 2019 à 10 :27 PDT

I'll Be Around
Mayor of the Lower Eastside
Tomorrow Today 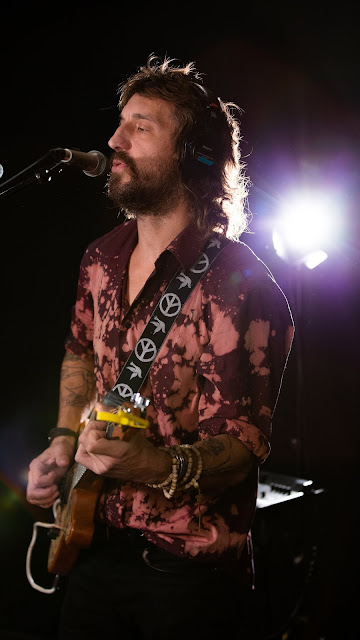 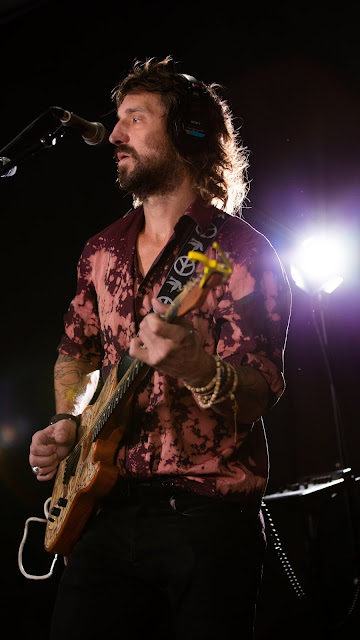 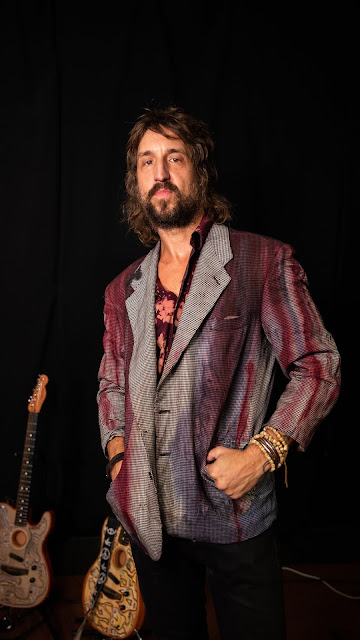 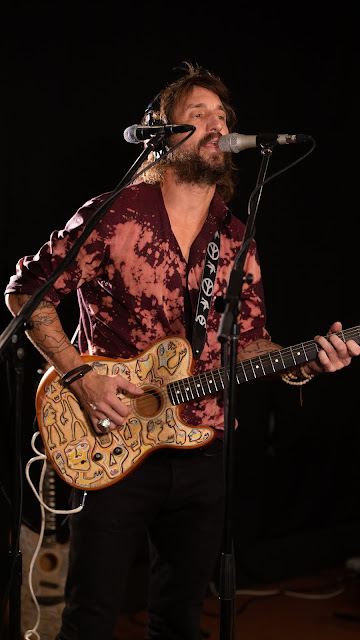 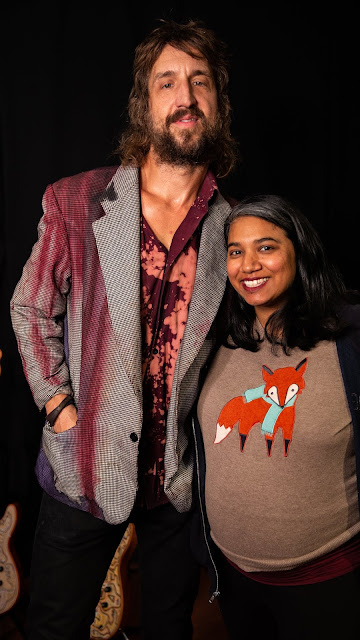 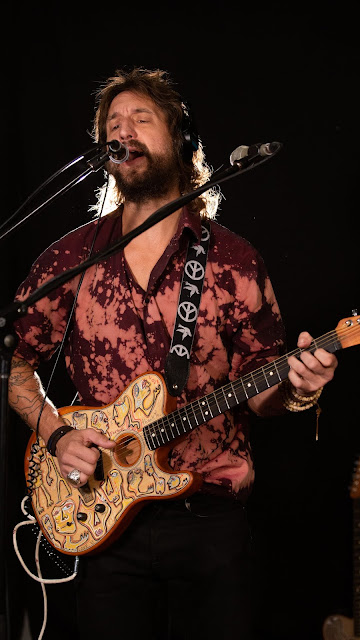 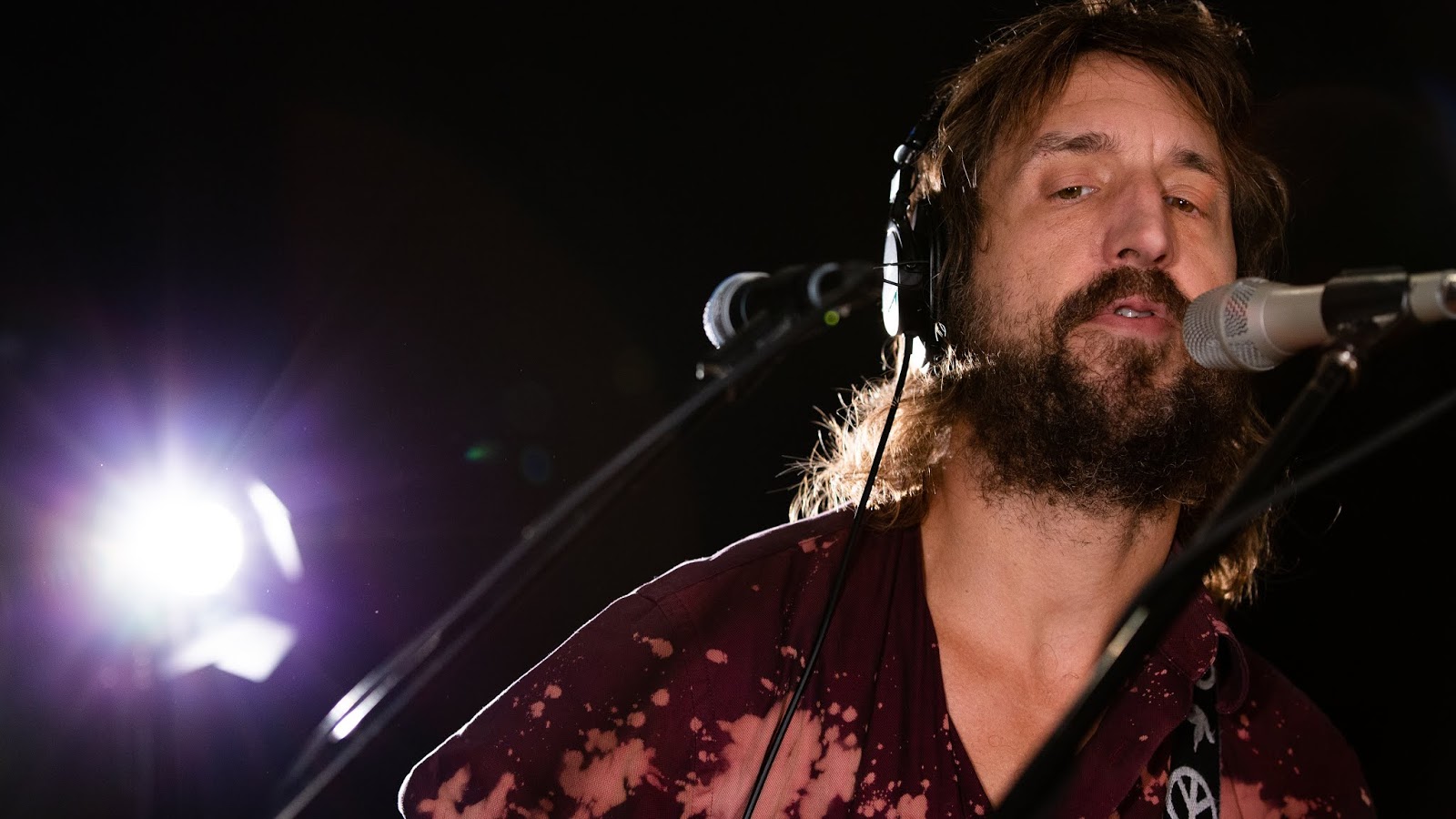 (incomplete & not in order)

Thank you Vivian, aka @lithophyte on Instagram, for these portions of songs : 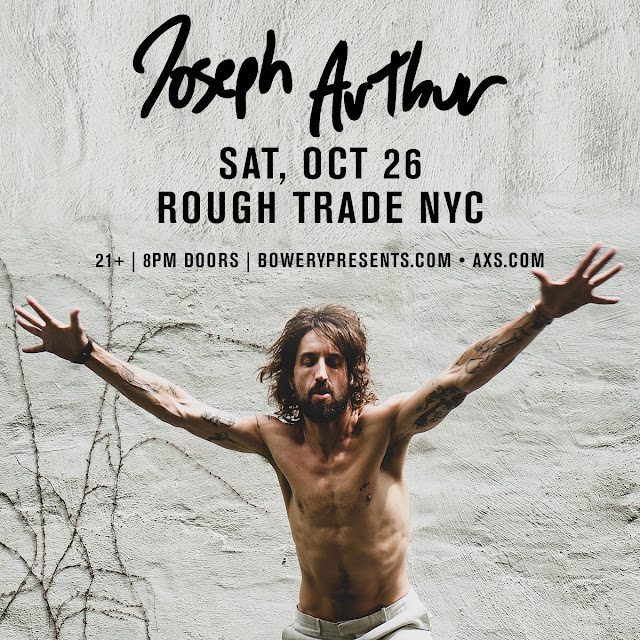 BROOKLYN, NY — Human experience is far more nuanced than the binary of happy and sad. We can be filled with wide expanses of unhealed geography and yet be whole. Augusten Burroughs explores this concept in “How to Live Unhappily Ever After,” and his masterful words (paraphrased here) come to mind as I dig deep into Joseph Arthur‘s achingly gorgeous new album, Come Back World.

These songs are weighted with significant loss, yet radiate warmth and a conviction that what we rebuild will be greater than what was there before, missing pieces notwithstanding. Arthur is forthright in explaining the animating forces around the album — eviction notices, physical injury, the emotional wreckage and long process of recovery from the abuse of people close to him (he’s spoken of narcissistic personality disorder on Instagram). The most compelling parts of our stories, he says, are “written with the smoke of our burnt-out lives.”

In a lesser writer’s hands, such personal revelations may appear as macabre exhibitionism. But Joseph Arthur’s honesty is without agenda — this is an earnest invitation to explore connections that are formed only when we admit our vulnerabilities. Meaningful art doesn’t materialize from the ether, after all — it’s created when we need a vehicle to help carry the heaviest burdens.Come Back World is grounded in a theme of rebirth, and this shines through in each of the ten tracks. The narratives feel more literal and less allegorical than in some of Arthur’s prior work, but remain open enough to serve as vessels for the listener’s own stories. The melding of folk lyricism with harder-edged rock and tastefully trippy effects is pure alchemy — the textures are layered but not to excess; the narratives are sentimental without being saccharine. Nothing feels rushed; nothing drags. And whether it’s the whistled intro and touches of Mellotron in “Streetcar,” or that bright glissando a third of the way into “Tomorrow Today,” there’s plenty of light in this album born of darkness.

The title track, for instance, starts with a scene of dissolution and departure set against a stark acoustic guitar, before evolving into something nearly euphoric. Electric guitars, keys, and other voices join in the harmony, and we’ve gone from rust to a gleaming satellite, an invitation to receive and return. Ben Harper contributes vocals on several songs, including the glowing “I’ll Be Around.” “Seek and Find,” for which Jesse Malin adds vocals, opens with hushed fingerpicked guitar, then builds to a bracing call to stand our ground amidst the darkness. (The saturated harmonics of the E-bow are hauntingly beautiful in this live looping version.) The Black Keys’ Patrick Carney provides the rhythmic backbone with nimble drum work that captures well the song’s sentiment — keep the engine running, turn off the lights … I’ll be right back outta sight … don’t run for cover from the darkness tonight.

Another standout track, “Pale Fire,” cuts straight to a painful truth that what you allow is what you receive, but also provides balm within the yearning refrain that leans forward, ever forward, to a place where meanings exceed our words. I don’t know if the title is a Nabokov-by-way-of-cyberpunk reference, and ultimately, it doesn’t matter — whether we’re humans or replicants who think we’re human, we’re all simultaneously so fragile and so tenacious, trying to peel back layers of delusion and projection to find the root of it all, pale fire jumping from a distant star. To my ears, the album’s beating heart is the liberating paradox that we cannot see ourselves clearly until what we know has been shattered.

The descriptors I use — burnt, shattered, wreckage — have jagged edges, but the songs themselves are beautifully rounded. I think it comes back to Burroughs’ idea that sadness serves an important purpose, and while we may never heal completely, it doesn’t mean we cannot be whole. Perhaps the comfort of what we call “sad” songs lies in the experience of listening to these songs together, knowing that we’ve survived the things that seem like they ought to destroy us — a friend’s suicide, a lover’s betrayal, a civilization’s undoing. That we survive, as Burroughs notes, should be encouragement to continue.

And on Saturday night in Brooklyn, the throngs pressed up against the stage at Rough Trade for Joseph Arthur’s hometown album debut show was proof positive of this truth.

For the uninitiated, Joseph Arthur has more than a dozen solo albums under his own name. His collaborations include Arthur Buck (with R.E.M.’s Peter Buck), Fistful Of Mercy (with Ben Harper and Dhani Harrison), and RDNM (with Pearl Jam’s Jeff Ament and Richard Stuverud). His songs have been covered by Peter Gabriel (Arthur was the first North American artist signed to Gabriel’s label) and Michael Stipe (another version is here, with Coldplay’s Chris Martin), and appear in The O.C. and Scrubs, among other shows.

When he’s not busy writing songs or painting (he’s a visual artist — more on that below), or boxing, running, and doing yoga, Joseph Arthur hosts a podcast called Come To Where I’m From. The series features free-wheeling conversations with a panoply of musicians of all genres, as well as other creatives like photographer Danny Clinch and comedian Dave Hill. (Arthur is a natural as interviewer-host — who else could engage Jakob Dylan (The Wallflowers) in a tête-à-tête on the virtues of sweatpants?)

One of the songs in Come Back World is “Mayor of the Lower East Side” — if we were to give Joseph Arthur a parallel moniker, maybe it’d be “Renaissance Man of Avenue A.” The Rough Trade show was a reminder of this polymath creativity. Arthur painted while performing “I Miss the Zoo,” a beat poetry-esque, rearview-mirror rumination on addiction. (Originally in Redemption City (2012), the track was reimagined for The Ballad of Boogie Christ (2013).) The song’s imagery is surreal and vivid — as they sing in spider voices / there goes creation, there goes the moon / there goes the butterfly wanting a cocoon.

The paintings displayed and made on stage — and drawn on Arthur’s Fender Acoustasonic Telecasters — are not literal translations of these ideas, but they share a similar energy. The art speaks for itself, though if pressed to describe the visual dialect, I’d say that the gestural brushwork and organic forms, juxtaposed against text, evoke Hilma af Klint’s mythical abstraction, Kandinsky’s later biomorphic works, and Basquiat’s raw, street aesthetic. It’s unclear whether the abstracted faces that Joseph Arthur creates belong to humans or aliens (either way, alienation is a condition of modern times), and whether these beings are seeking a door in or out of this place. But like their creator, they contain a feverish energy, always in the process of becoming. (A couple of the pieces went home with lucky concertgoers that night.)

Though Joseph Arthur has been performing solo on this tour, his wizardry with live looping — he has a two-mic setup and an array of pedals — enables him to weave mesmerizing sonic tapestries. The Brooklyn set focused on new songs and included a solid selection of earlier material. When particularly enthusiastic fans wouldn’t stop yelling out requests for “In the Sun” and “Honey and the Moon,” Arthur grinned good-naturedly as he cut a deal: “I’ll play this, but then you have to do a singalong with me.”

That singalong was to Ho’oponopono — the Hawaiian forgiveness ritual. Skeptics in the audience eyed the stage nervously, and Arthur himself cracked a joke about the hippie vibes. But a minute in, we were all on board, harmonizing to the repeated refrain: I’m sorry, please forgive me, thank you, I love you. It felt right on a rainy night, to start washing away the accumulation of regret and guilt.

As I write this, I think about how difficult it’s been to write about or shoot shows since I woke up last May to a friend’s text. It was three words: “I’m so sorry.” I didn’t need to check the news to know what it meant — Scott Hutchison had been found. I spent an excruciating hour that morning editing photos of a band that had just played some shows with Frightened Rabbit (that band’s publicist asked for images they could post in tribute). I remember staring at the screen, hating my photos for being fundamentally insufficient. There wouldn’t be another encore, another post-gig hang that spilled into the wee hours of the morning, another “see you next time.” I remember sending a few photos, then lacing up my shoes for a cold run along the Hudson. The numbing grief was the storm that had rolled in across the water — there was no outrunning it.

It’s been more than a year, and I still can’t figure out which end is up and which words fit. But there’s something about the two albums with which I’ve spent a lot of time recently — Joseph Arthur’s Come Back World and Jesse Malin’s Sunset Kids — that loosens the knot inside me. I think it’s because both albums come from deeply-felt loss. They emerge from a darkness that I recognize, but the songs themselves don’t feel dark — they’re contemplative and ultimately hopeful.

The truth is that we’re all marked with scars of various shapes and sizes. The pain could have hardened us against the world, but it has instead cracked us open, allowing us to reassemble ourselves in ways that feel more intentional than before. So I’ll end where I began — with Burroughs’ idea that we shouldn’t be chasing after some ephemeral goal of being “happy” or “healed.” We’re damaged, missing parts of ourselves — but we can still be whole. “Human experience weighs more than human flesh.” So don’t hide away, even for another night.